“Told in a voice that is so real it reeks of filched peaches, this book is a home run.” —Amy Sarig King, Printz Award–winning author of Dig and The Year We Fell from Space

Sandlot meets Esperanza Rising in this lyrical middle grade novel set in the 1930s about a strong-willed girl who finds her voice in a tale of moxie, peaches, and determination to thrive despite the odds.

When the skies dried up, Gloria thought it was temporary. When the dust storms rolled in, she thought they would pass. But now the bank man’s come to take the family farm, and Pa’s decided to up and move to California in search of work. They’ll pick fruit, he says, until they can save up enough money to buy land of their own again.

There are only three rules at the Santa Ana Holdsten Peach Orchard:

Well, Gloria Mae Willard isn’t about to organize any peaches, no ma’am. She’s got more on her mind than that. Like the secret, all-boys baseball team she’s desperate to play for, if only they’d give her a chance. Or the way that wages keep going down. The way their company lodgings are dirty and smelly, and everyone seems intent on leaving her out of everything.

But Gloria has never been the type to wait around for permission. If the boys won’t let her play, she’ll find a way to make them. If the people around her are keeping secrets, then she’ll keep a few of her own. And if the boss men at the Santa Ana Holdsten Peach Orchard say she can’t organize peaches, then by golly she’ll organize a whole ball game. 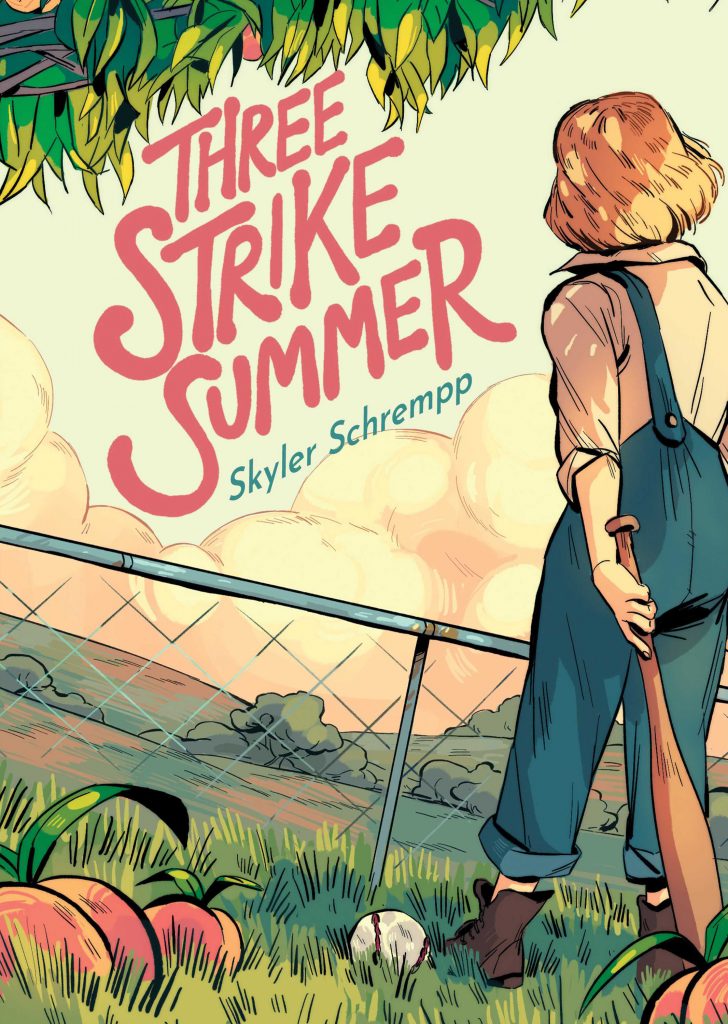 *“Narrated by Gloria in a conversational tone that brings the setting to life, readers feel her grief, outrage, and gritty determination. Descriptions of the Dust Bowl years and hardscrabble life in the camps are searing.”

*“Gloria’s forthright narration showcases her tenacity and burning sense of injustice, which transforms her parents’ resignation into resolve, providing an admirable maturation arc alongside a vividly rendered, emotionally vulnerable account of the harsh conditions faced by migrant workers.”

*“Schrempp’s writing is thoughtful and accessible, containing richly developed characters—Gloria is outspoken and determined yet teachable; her family, resilient. Even her nemesis is well-rounded. Readers will applaud Gloria and the workers while gaining understanding of a time that extends far beyond sepia-toned stills. This moving tale breathes life, depth, and color into the era.”

*”Scrappy Gloria Mae, the youngest child, tells the story, and Schrempp admirably never wavers from her perspective…Gloria’s struggles to join the team and her father’s desire for change coalesce in Ma’s words: ‘When you don’t fight for what you deserve, the world just digs its heel into you a little bit more.’ An informative author’s note adds historical context.”

“Gloria Willard is one of a kind—she won my whole heart and her story will stay with me for a long time. Touching, informative, and edge-of-your-seat, this novel about a family traveling west during the Dust Bowl is a captivating must-read.

Told in a voice that is so real it reeks of filched peaches, this book is a home run.”

“Skyler Schrempp’s debut novel is as fiery-fast and dead on-target as one of Gloria Mae’s fastballs.

In a Depression Era Dust Bowl setting so well rendered you can feel the dust gritting in your clothes, the dangers in Three Strike Summer—environmental disaster, worker exploitation, and the power of the wealthy to rig the system—will feel keenly relevant to modern readers. Gloria’s quest to pitch on the orchard’s secret baseball team is one we root for (heck yeah!) but as Gloria would tell you, it turns out a true win is about more than that. It is about a whole team (and community) standing up and sticking together.

A heart-felt, wallop-packing, winner of a novel kids will find both inspiring and empowering.”

“A stirring debut that will tug at readers’ heart strings, make them breathless with excitement, and have them cheering at the end.

Told in an authentic voice that always rings true, Three Strike Summer tells the story Gloria, whose family is forced off their land in Oklahoma, only to become migrant farm workers in California. Gloria has one great wish in her life—be a baseball player. But she faces gender discrimination when the migrant boys won’t let her on the team. To get the chance to play, she has to prove to the boys—and to her father—that she’s every bit as good as they are. Full of rich historical description, bone-aching grief, and laugh out loud humor, this novel is a delight to the ear as well as the heart.

Skyler Schrempp is a stunning new voice in the world of children’s literature.”

“Baseball makes great fiction. A League of Their Own, The Natural, Bull Durham, The Art of Fielding, Major League, A Field of Dreams, 61…our literature and movies are littered with powerful stories that revolve around America’s favorite pastime.

To that shelf, you can add Three Strike Summer by Skyler Schrempp, tucked between Malamud’s The Natural and Kinsella’s Shoeless Joe. Like those novels, Three Strike Summer is about dreamers. Roy Hobbs dreamed of the big leagues, Ray Kinsella dreamed of baseball diamonds nestled in fields of corn, and young Gloria Mae Willard dreams of pitching for a real team.

But Gloria’s a girl and this is the Great Depression. Girls don’t play ball.

Schrempp could have woven a perfectly fine novel out of that right there. A tale of female empowerment and overcoming odds and proving oneself worthy in the face of oppression. Classic.

Instead, she tucked classic inside a new wrapper, offering a baseball story inside a struggle of Dust Bowl migrants facing injustice in California. Imagine The Sandlot mashed up with The Grapes of Wrath and you’re in the ballpark.

Three Strike Summer knocks it out of the park.”